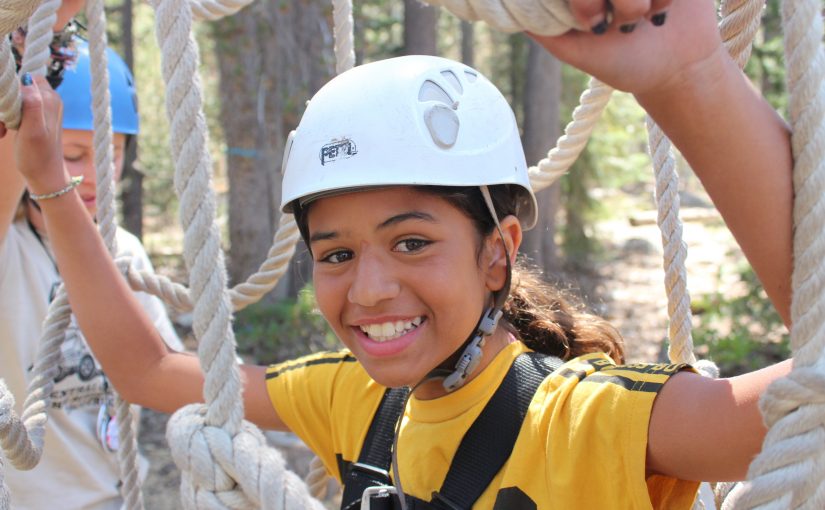 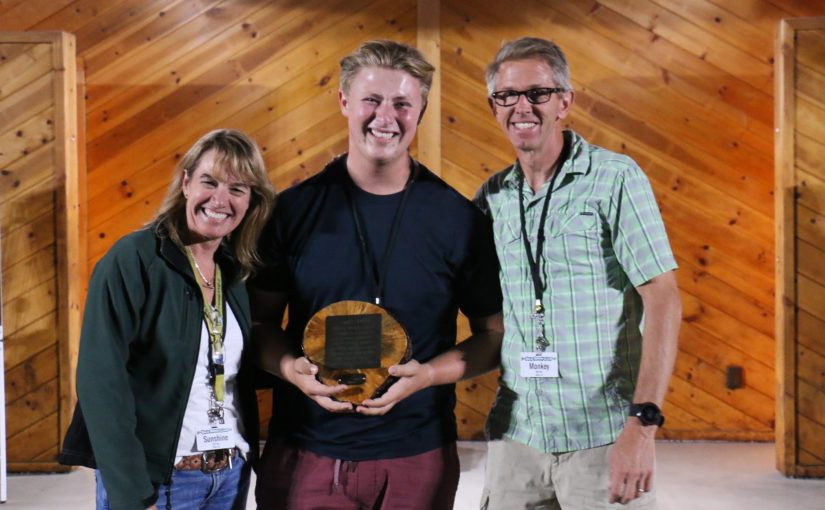 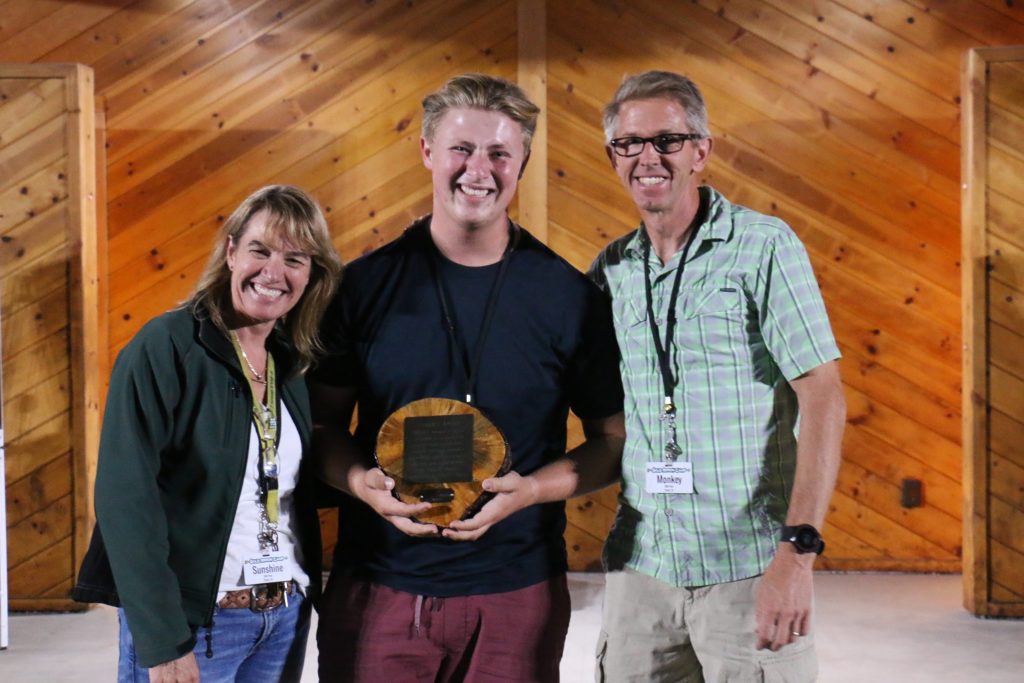 There were many 2018 staff who met the qualifications for this award and stood out for their positivity and encouraging words for others. In all, 30 different staff members were nominated. That means that each of those 30 people stood out to another staff member as someone who was a positive, encouraging, supportive leader.

This summer’s recipient, Henry “Bravo” Pedersen, joins the ranks of many other well loved, longtime, members of the GAC community who have positively impacted campers and staff, including 2019 staff members Baboon, Cheerio, and Toyota.

There were many positive comments from his fellow staff members on his nominations, including:

Every time I saw you with your boys you were positive and knew just what they needed. You were so funny at morning assembly too. Never failed to put a smile on my face and others too.

Best counselor here and it’s not even close. Killed it at the hardest job at camp and still knew more kids than his own cabin. Best co ever. He’ll drive up to accept.

You are so extremely positive. Your energy is contagious and your patience is inspiring. You are always there to help anyone, and be a friend to anyone. Above all you are humble, and unafraid to ask for help. That’s a trait not everyone had, and I believe that’s what makes you coach’s award worthy. <3 never stop being you.

He was always so positive and happy around campers. He was very involved during rocks & ropes activities with encouraging his campers to challenge themselves. His energy was always present in all that he did. Camper and counselors looked up to his leadership and kindness.

He has endless patience for kids, he has a great presence and always radiates positivity. Seeing his smiling face on the dining porch always put us in a better mood. I think he really represents the GAC spirit and I was happy to have met him.

Everytime I saw him he always had a smile on his face. He seemed like a great counselor and a great guy regardless of who he was interacting with. His positive attitude was contagious. 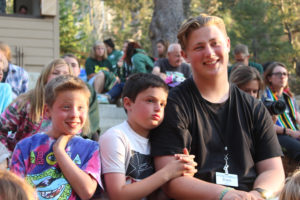 Bravo provided an amazing example of what counselors at GAC should be like. Despite having youngest bears for 6 weeks straight, Bravo always had a smile on his face and never once outwardly showed any signs of exhaustion. If I ever worked just half as hard as him, I would be so proud of myself. Bravo, Bravo!

Bravo was the most calming spirit everywhere he went! He oozed enthusiasm and is the perfect demonstration of selflessness & patience. He is an incredible counselor.

Always involved & present with his campers. So kind toward everyone, energized & went above & beyond everyday.

Bravo stepped it up for his first year on staff. He always had a smile on his face even through difficult moments. He was so full of positive energy & knew how to pump up any crowd!

Kind, caring, helps anyone regardless of vote or position. Always gives 100% to campers & staff. Never belittles anyone, treats male AND female staff equally. Always has a kind word to say. He gives camp a special spark. He has more patience than anyone I’ve ever met, and I’ve never been more in awe of a coworker.

You are always positive. You are welcoming & kind to everyone. It was such a joy to meet and spend time with you this summer.

I nominate Bravo due to his ceaseless energy, enthusiasm and patience despite having some of the hardest cabins and most difficult children. I have no doubt that he has left an ENORMOUS impact on his boys, all of whom camp is probably the most challenging yet most positive experience of their year. Bravo brought 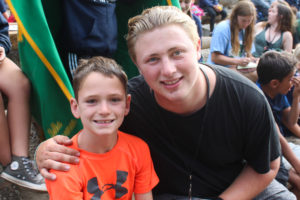 a smile to every child and counselors face alike.

Bravo always went above and beyond for his campers. He is super prepared, engaged, cheerful and funny. He always greets me with a smile even though we don’t know each other that well and his campers thrived off his positive energy!

Bravo is an outstanding counselor. He has incredible patience and kindness with his campers. He’s kind & funny & fun to work with. I never saw him without a smile& really loved how inclusive he is to both his campers & fellow staff!

He always brings smiles to other faces. You can tell by his actions how he actually cares about others and how they are doing. When someone asks him for a favor or help he jumps on it with no hesitation. His positivity brings out the best in me as well in others. If anyone deserves it it’s Bravo!

He went above and beyond with his little bears like he literally lost his voice for a month. He makes it look so easy to be a GC, be everyone’s friend, and still be upbeat and active at camp.

Bravo embodies GAC values, energy, love and spirit. He was consistently happy and spreading his positivity to campers and staff.

So much respect for how you managed to keep up your energy always smiling, always helpful and kind. You did such an amazing job with the baby bears and I’m sure everyone loves you.

Seeing the way Bravo interacts with his campers has always warmed my heart. His amount of spirit and fun loving energy has brought so many smiles to GAC.

Congratulations, or shall we say “BRAVO!” to the 2018 Coach’s Award recipient – Henry “Bravo” Pedersen! 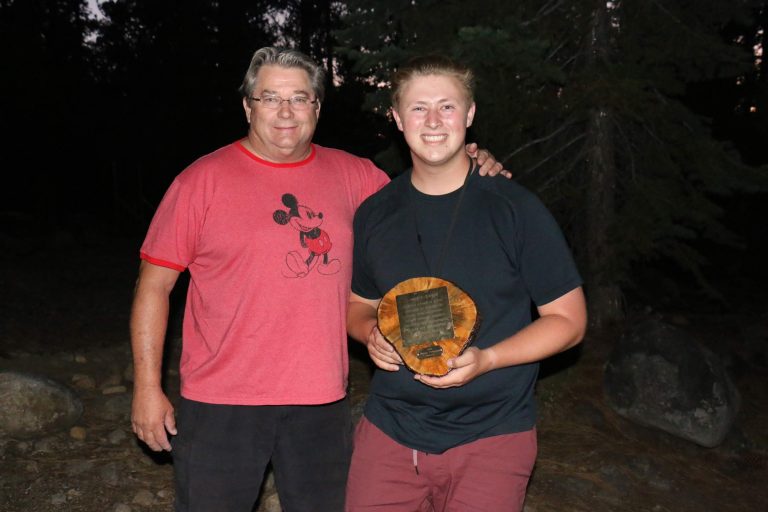