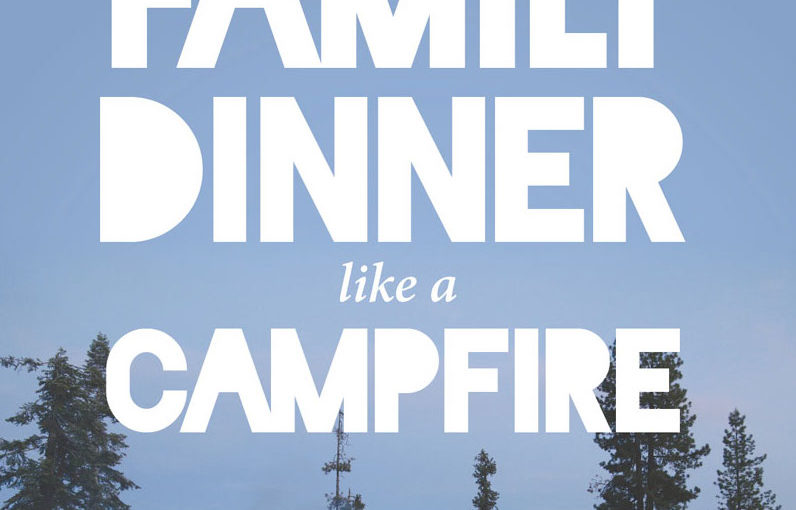 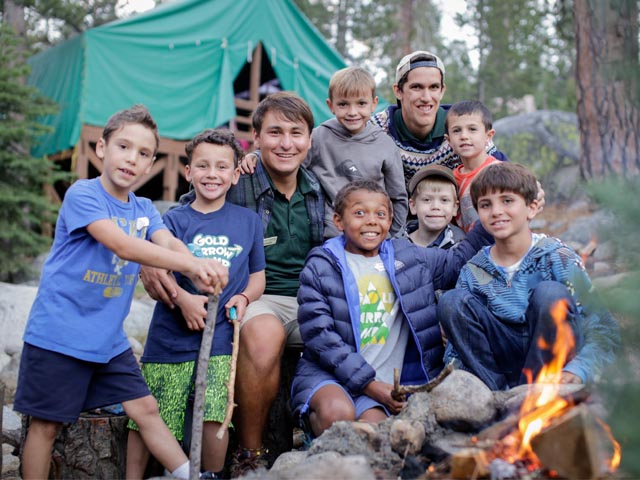 Most of us know the importance of family dinners:

Kids who regularly eat dinner with their families are more emotionally stable, are less likely to abuse drugs and alcohol, get better grades, have fewer depressive symptoms, and are less inclined to obesity or eating disorders.

It’s certainly a compelling list. But what can you do if your family dinner isn’t that great? If people just “eat and run” or don’t really connect? One answer might be turning your dinner table into a campfire pit. Not literally, of course, but group campfires at summer camp offer a great example of fun, engaging activities that have helped make dinners at our house last longer than the ten minutes it takes my boys to shovel down their food.

Here are some ideas:

Sharing highs, lows, and “gratitudes” (I know that’s not a real word, but that’s what we use)

One way we’ve found to get everyone talking and contributing at our dinner table is consistent sharing time. We find out what’s going on in our kids’ lives (and in the lives of unsuspecting visiting friends) and we as parents share what’s going on in ours. For children who are quieter and generally don’t “take the floor” as often, this consistent discussion helps them open up.   And for those who don’t naturally focus on the good things, it helps them see the positive in their day.

Around the campfire, it’s an activity called “High & Lows,” or—as it’s now evolved in our family—“Highs, Lows, and Gratitudes.” It’s very simple:  Each person has a turn (uninterrupted, with everyone focused on that one person) to share
•  their HIGH point of the day,
•  their LOW point of the day, and
•  their GRATITUDE—what they’re feeling grateful for.

For a twist, we sometimes make rules for sharing: a “high” might be limited to three words, or a “low” might have a one word limit.  It creates a fun challenge and makes us think. If we can’t come up with a low, we share another high.

Sometimes, we interrupt, tell long stories, or go off on tangents, but that’s okay.  We’re connecting, sharing, and discovering what’s happening in each other’s lives. Our dinners last much longer than ten minutes, and our kids know they won’t be excused until everyone shares.

In The Whole-Brain Child, Daniel Siegel and Tina Payne Bryson write about the importance of getting kids to remember their stories.  So, instead of asking “How was your day?” which invariably gets a one-word response, they recommend asking “What was the best part of your day?” and “What was your not-the-best part?”  Sounds like a high and low of the day to me!

Question or topic of the night 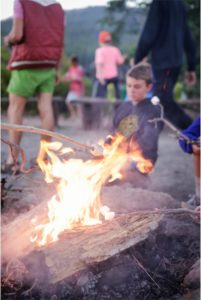 There are so many fun books and table games available, but you can probably just take turns thinking up a fun question for each person to answer, much like counselors do around a campfire. For my birthday a few weeks ago, a friend who knows me well gave me Q & A a day for Kids by Betsy Franco, which has 365 questions (one for each day) to discuss with your kids. We also have used The Enchanted Table (by Memorable Mealtimes) and Table Topics, a box of questions that our kids like taking turns reading.

Family Meeting (once per week)

At camp, we always start the session with what we call our “First Night Campfire.” The counselor has a specific agenda for the campfire, which includes all the kids getting to know each other, sharing a goal they have for camp, and what guidelines they want to live by during their two-week stay. Families need to do the same kind of checking in with one other, so—once a week—we have a “Family Meeting” during dinner. We have an agenda that’s on a legal pad next to the table, and we take turns being the “chair” of the meeting.

On our agenda:
• What’s going on this week? We talk about the schedule for the coming week (any big projects/assignments due, any events, parents going anywhere)
• Goal for the week: Each person shares a goal for the week (something we want to get done, do better, etc.)
• A value or social skill we want to talk about. These have been focused on social skills for the past year in our house, and we’ve talked about things like looking someone in the eye while meeting them and how to chat with an adult. We’ve also used this printable (“10 Social Manners for Kids” from iMom) for several topics. Lately, it’s been a contest to see who can remember all ten!

We’ll hold fast to our family dinner time as long as we have kids in the house; I know it will be over far too soon. In the whirl of the last four years, our family group of seven has dwindled to the “final four”: me, my husband, and our two youngest. The meals we share are nothing like June Cleaver’s pot roast, and they often involve my awesome husband cooking or picking up something easy to eat or make. It’s rarely a big production, but it’s still really big. When we are gathered around our table eating and talking—with no phones or tablets in sight—it doesn’t matter if we have a home-cooked meal or a Panda bowl; as long as we’re connecting and sharing, it’s the biggest and best part—it’s our HIGH  point—of the day.

All we’re missing is the campfire.

It’s a human-interest story that spans nearly 25 years and has at its epicenter the small Dutch city of Woerden, which beyond its city proper is a land of mostly meadows and farms on the banks of the Old Rhine River in central Netherlands. Woerden boasts a population of some 50,000 people, most of whom ride bikes, eat poffertjes (tiny sweet pancakes with butter and sugared icing), and commute by train to jobs in Amsterdam, Rotterdam, and The Hague. Woerden has a windmill (“De Windhond”) in the city center and its own castle (the Castle of Woerden, built in 1410 by Duke John the Pitiless). The city has a long and rich history of cheesemaking and trading, with an established international market for its Gouda. In fact, not far from De Windhond in the city center, cheesemakers still sell product in the marketplace, where they have done so since 1885.

The Singel, Woerden, The Netherlands

Not so longstanding is Woerden’s connection to Gold Arrow Camp. Over the last two-plus decades, the city has been the source of several top-notch counselors—nine, to be exact—cementing its place in camp history as a Gold Arrow “sister city” and trusted pipeline for hard-working, friendly, and reliable staff.

The Woerden Legacy starts with Wendy “Dutchie” Kuiters, who came to Gold Arrow in the summer of 1993 after responding to a flier left in her college mail slot. Dutchie recalls having to write a letter about herself then stapling a picture to it before sending it to a recruiter. Back then, her packet circulated via U.S. Mail to camp directors seeking international staff. Thankfully, Gold Arrow nabbed her first, hiring the flying Dutchwoman to teach windsurfing at Huntington Lake where she became a mainstay on the Gold Arrow waterfront in the 1990s.

At home in Woerden, Dutchie had started a career in education. She became a master teacher, mentoring other young educators, always keeping an eye out for those who would be a good fit for camp. “I was very selective about who I recommended,” she said. “I felt responsible for whoever I brought.” In 2002, she met Sjaak Vermeulen, a young Dutchman who’d been placed in her classroom. His connection with the children was instant, and Dutchie knew he would be great at Gold Arrow. On her recommendation, Vermeulen applied.

The two came to Gold Arrow together in 2003. Dutchie was the Shaver Island Director and Vermeulen, who’d taken the nickname “Link,” worked with the “Bears”—Gold Arrow’s youngest campers. Link’s legacy to Gold Arrow, besides helping bring seven more Woerdeners to camp, was his founding of “Bears Adventure,” a one-night, low-impact hike and campout designed to help young campers transition to longer backpacking trips.

Link, Sunshine, and Orange near the Woerden Water Tower

In the fall of 2014, Steve “Monkey” and Audrey “Sunshine” Monke visited Woerden so they could see first-hand where all these fine folks called home. Like other locals, they climbed aboard bicycles and pedaled the bucolic countryside, even partaking in a rousing game of Farmersgolf (“Boerengolf” in Dutch), a game invented in the Netherlands in response to costly greens fees there. The game, played with a special club (the club head is in the shape of a wooden shoe) and an oversized (20-cm diameter) ball, requires players to navigate strategic hazards on an otherwise unaltered farm. Live cows and ditches are par for the course as players attempt to hole their ball in a buried bucket with a flagpole beside it. At one point in their lives, Link, Orange, Bloom, and Ajax were all employed by De Boerinn, Woerden’s Farmersgolf club.

Monkey ready to go on the 18th hole at Farm Golf

On the ride from Woerden to de Boerinn (Farm Golf)

Resting after the 9th hole

In 2017, the woman who started it all returned with yet another Woerdener, her 4-year-old daughter Kiki, who one day will be a Gold Arrow camper and perhaps follow in her mother’s (and several others’) footsteps to join the camp staff.

The future of the Gold Arrow/Woerden alliance is bright, indeed.