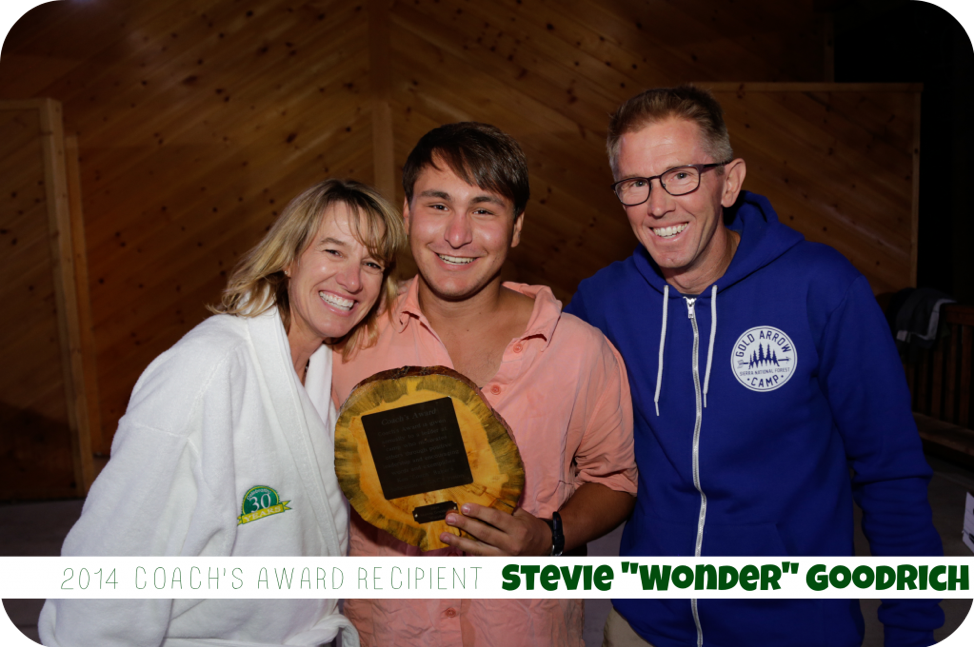 In 2009, Gold Arrow Camp lost a dear friend. Ken “Coach” Baker (March 10, 1951 – April 5, 2009) worked at GAC as Assistant Director and Director from 1981-1992, and he had a huge, positive impact on many still at camp today. Ken was instrumental in helping the Monke family purchase Gold Arrow from Jeanie Vezie in 1989 and mentored Sunshine and Monkey during their early years. Ken’s wife, Carol “Mama Bear” Baker, was also a long-time staff member at GAC. Many current staff who were former campers may remember Mama Bear from her many years as Camp Mom. Ken’s daughter, Ali “Picaflor” Baker, was a camper throughout her childhood, continued on as a CIT, and spent a summer working as an Activity Counselor on the Waterfront.

In 2009, Gold Arrow Camp established “Coach’s Award” to honor Ken. This award is given each year to a leader at camp, nominated by his or her peers, who motivates others through positive leadership and encouraging words and exemplifies Ken “Coach” Baker’s dedication to GAC’s vision. There is a wooden plaque in the Camp Store to commemorate Coach and past counselors who have received the award.

This year, 31 different staff members were nominated for the award. This is a testament to the positive culture and leadership that has been established at GAC, thanks to the influence of Coach and the leaders who have followed in his footsteps. Those nominated received a copy of the comments that went with his or her nomination in the hopes that counselors recognize what an honor it is to be distinguished in this way through recognition by peers at camp.

Stevie “Wonder” Goodrich, the 2014 “Coach’s Award” recipient, is one of a kind and has a long history at Gold Arrow Camp.

Wonder spent eight years as a camper and CIT before returning this summer for his first year as a counselor. He embodies the fun, energy, love and spirit the GAC community is all about, and Coach would be proud to see the excellent counseling skills he practices.  In the nominations he received from other staff, kindness, warmth, and patience were mentioned many times. In addition to these qualities, his positivity, enthusiasm, and energy were also mentioned.

Here are a few of the things counselors who nominated him had to say:

“Wonder was by far the nicest person I met during Tweek, and he continues to be an extremely positive role model for me. His energy with Bears is endless and his dedication to his kids and his job inspires me every day. On top of being an incredible GC, he also manages to be a great friend.”

“I never see anything but a massive smile on his face. He always has so much energy, which he maintains all day long, and if he ever gets exhausted from working with the baby Bears, I’ve never seen him show it. He is an inspiration to all of his fellow counselors.”

“His energy and positive attitude is inspiring. I love the way he empathizes and understands the individual needs of each camper and will seek help when needed.”

“There are few people that have the energy and amazing attitude that Wonder has. He makes everyone smile. There are really special people in this world that can change lives, and he is one of them.”

In Wonder’s college entrance essay, he wrote of his time mentoring and learning from campers at GAC. He closed his essay by saying, “In my heart, I know that every child I work with helps me to see clearly the important things in life one cannot easily see, and to become a better person for these experiences.”

Why did you want to be a counselor at GAC?

I wanted to be a counselor at GAC because I always felt as a camper that the counselors were what made camp so special and so much fun. The counselors I had during my 8 years as a camper really helped to shape me into the person I am today. GAC really could be the most positive and happy place on earth! 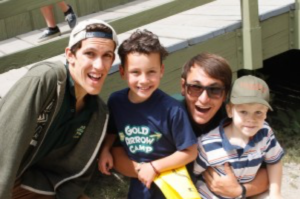 What counselors influenced you the most as a camper? What did they do?

Two counselors that really stand out in my mind when I look back are Blue and Zizzou.Blue, my AC for my second year was one of the nicest people I’ve ever met; I couldn’t believe someone could go so far out of their way to do nice things for other people. Zizzou, my GC in my 5th year, was fun and crazy, and showed us the GAC way of doing everything possible to have an absolute blast.

What was going through your head when you received the Coach’s Award?

Utter shock. Insane excitement. Immense Pride. Oh! And “don’t cry, don’t cry”. It was all kind of a blur. Having worked this summer with such an amazing group of counselors, it was a huge honor to receive the award.

What do you love about working with young people?

My favorite thing about working with young people is getting to see kids arrive extremely worried or scared for an activity, and then watching them work to conquer that fear or try something new. There is no better feeling than seeing that huge smile on their face and how proud they are of their accomplishments and growth.

Do you think Hip Hip Hippopotamus will make a comeback next summer? Are there any new projects lined up in the camp offseason? 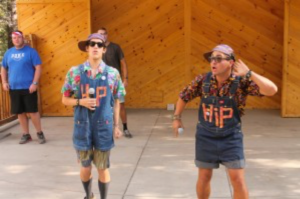 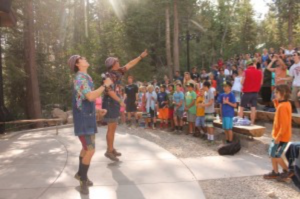 I cannot confirm or deny the special super secret tour schedule of HHH, but I think it’s safe to say some new songs might be heading to GAC next summer, including Cat Party and Fanny Pack. #ReturnOfTheOveralls2015

If you could have any one condiment squirt out of your finger, what condiment would it be?

Wonder: Ranch Dressing, of course! I put ranch on my ranch.

What is your favorite activity at GAC? 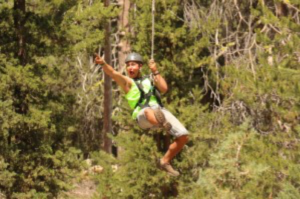 My favorite activity was always waterskiing (try dancing while waterskiing, its pretty fun). Although, this summer I was talking with a worried camper about both of us conquering our fear of heights by both trying the Zip Line, an activity I had always been too afraid to try. By the time we were back on solid ground, both of us agreed that Zip Lining was probably one of the coolest activities at camp, regardless of how loud I screamed on the way down.

Is that even a question? TEAM CHOCO TACO 4 LIFE!

What do you really think happened to the giant chipmunk?!

After a chemical accident that transformed him, he saved Manny Vezie and the famous scientist Eric Bader from a fire in Bader’s lab… … didn’t he?

What was your biggest takeaway from camp this summer? What did you learn from the experience?

This summer really taught me to break out of my shell and to just be myself. I also learned to always smile, dance like nobody is watching, Footsie PJ’s are very comfortable, the log cabin structure of wood makes a better campfire, and that singing 80’s Hits at top of your lungs is the best way to wake a cabin up in the morning.

I cannot wait to be back in the Sunny Sierras this summer, I am counting down the days. I am super excited to see all the amazing campers and counselors I met last summer, and to make tons of new friends too! See you guys this summer!

Have a WONDERful rest of the school year! 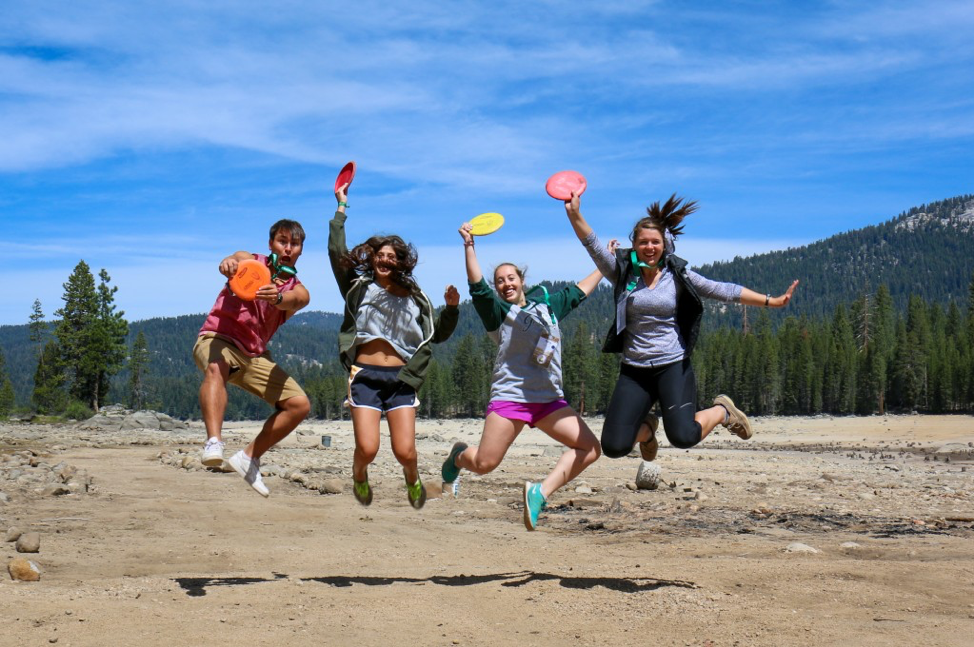